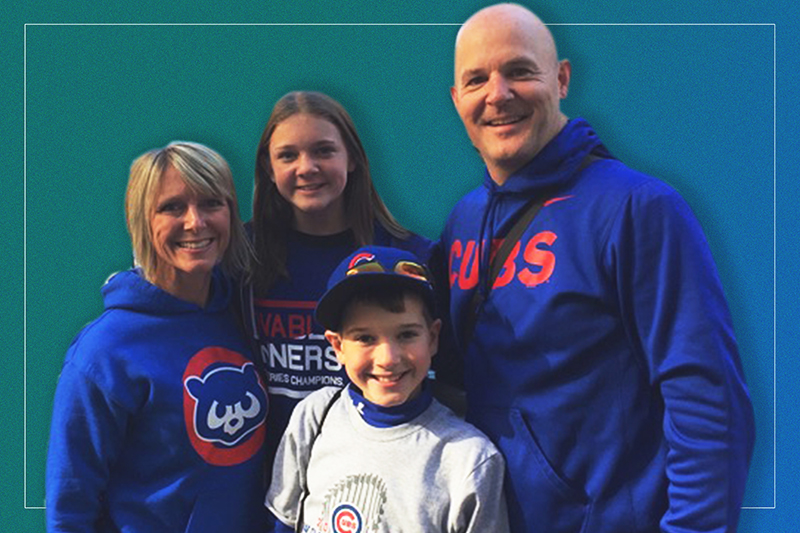 Missie and Mike (Mom and Dad) and Libby and Charlie (The Kids) have been active Y participants since 2010, approximately five years before the Morris Y opened its doors on Wauponsee Street. Even without a physical presence in the community, the Y found a special place in their hearts through yearly basketball leagues and summer sports camps.

“The Y filled a void that loomed in our community,” Missie says. “We don’t have a Parks and Recreation Department, so in the past, I would have to leave Morris to fulfill our interests. Now that we have the YMCA established in Grundy County, I see it addressing the wants and needs of a much larger spectrum, which is invaluable. The Y promotes healthy living, while building a real sense of community with members and non-members alike.”

Today, their bond with the Y is stronger than ever. The Wrights support the Y’s mission by contributing to the Annual Campaign and attending the annual Giving Gala. By supporting these initiatives, the Wrights are helping the Y reach more and more people in Grundy County and ensuring Y services are accessible for all.

“The Y brings people together in a positive environment, and while doing so they are building confidence, acceptance and wellness,” Missie says. “It doesn’t get much better than that.” 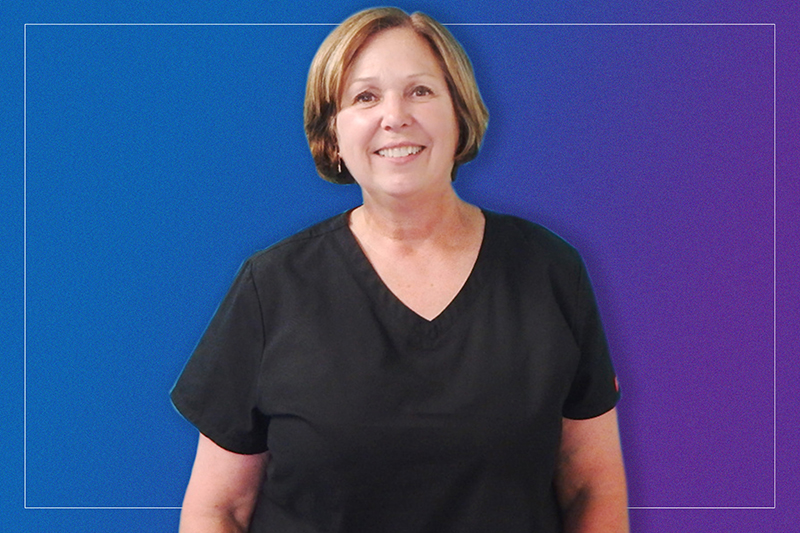 Patricia Cravens has been a member of the Morris YMCA since the day it opened. Looking back, the timing couldn’t have been better. At the time, she had been looking for a local gym to join. Then she heard about the Y’s partnership with her employer Morris Hospital and jumped at the opportunity to enroll. Through the partnership, Morris Hospital provides free Y memberships to employees who meet utilization requirements.

“The YMCA is the perfect gym for me,” she says. “It feels like home.”

Patricia visits the Y between three or four days per week. Oftentimes, she uses the treadmill, arc trainer, row machine and free weights. But it’s the yoga classes that keep her coming back.

“I have tried several of the group programs and I especially love the yoga classes,” she says. “The stretching, strengthening and balance exercises have helped me so much. My lower back pain has completely resolved after participating regularly in yoga class. All the instructors are wonderful and patient and take the time to make sure you have correct form.” 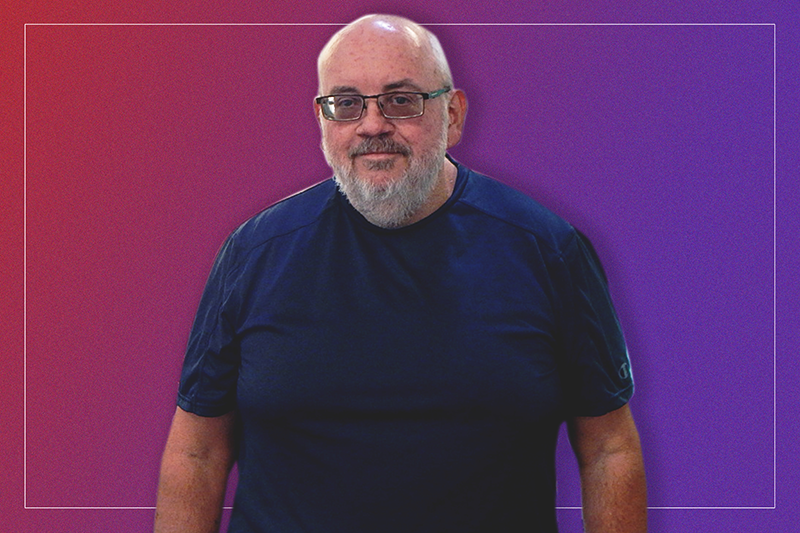 David Alford of Morris says he was in a downward spiral up until he stepped foot in his hometown YMCA. He had been recovering from multiple surgeries and struggling with his weight. He could barely walk. But the community atmosphere cultivated by YMCA staff and his fellow members lifted him up. Since joining the Y in 2015, he has lost 80 pounds (and counting) and no longer has trouble walking.

Early on, David primarily took classes geared toward seniors. The low-impact exercises were a sturdy stepping-stone on his path to a more healthy lifestyle. Until one day, his niece Harmony recommended Sarah’s Boot Camp, a more demanding interval strength training class. David admits that extremely difficult, but he stuck with it. Before long, he found himself signing up for specialty classes such as TRX Suspension Training and Tabata Cycle.

These days, David mainly keeps to a conditioning routine: working with kettlebells, medicine balls and slam balls. But every now and again, he likes to pop in a daily group exercise class, where he finds a sense of community and camaraderie.

“It’s hard for me to picture Morris without the Y,” he says. “Before, there weren’t any places like this. If you wanted to work out, you had to go to a commercial gym or somewhere else. [At other places], there’s just not the same kind of atmosphere [like there is at the Y].” 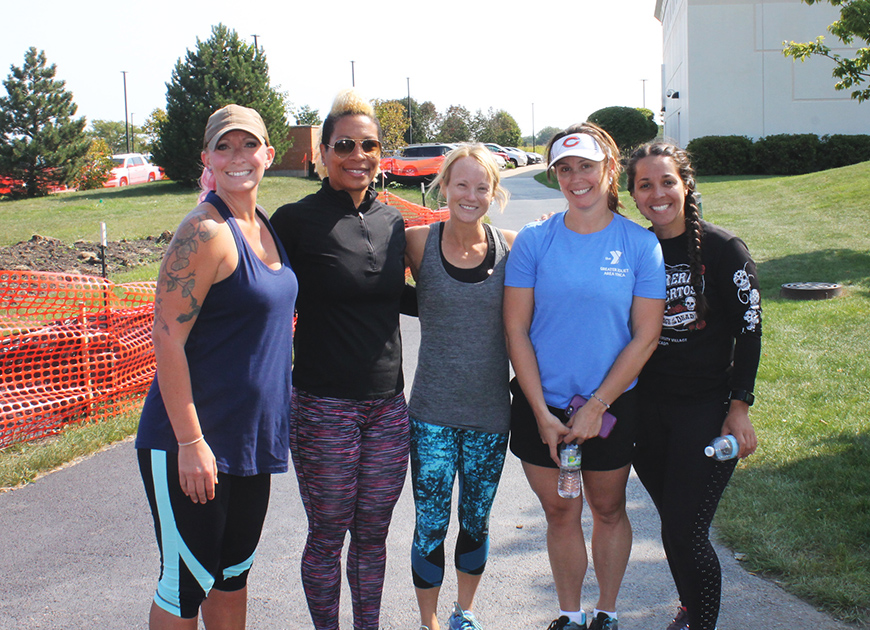 At the C.W. Avery Family YMCA’s Family Field Days earlier this month, a group of YMCA instructors participated in various fitness challenges to raise YMCA scholarship funds. Some did push-ups or burpees. Others did tire flips. Thanks to pledged donations from family and friends, the group raised more than $3,200!

Huge thanks to our instructors, pictured above from left to right, Kristen Derengowski, Marenda Eison, Courtney Orlando, Melissa Vidito, Yesenia Barajas and (not pictured) Steve Toliver. Because of their efforts, we can ensure YMCA facilities and services are accessible to all.

You can prepare this light and healthy cucumber sandwich snack in less than 5 minutes. Give it a try!

Instructions
Assemble the cucumber sandwich by stacking a bread slice, tomato slice, piece of cheddar cheese and slice of deli meat between two cucumber slices. Once the sandwich has been assembled, you can place a toothpick through the center of the sandwich. 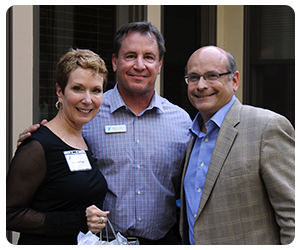 The Greater Joliet Area YMCA held its annual Heritage Club Dinner on Friday, August 4 at the home of benefactors Ed and Gloria Dollinger of Joliet. More than 60 of the YMCA’s closest friends attended this special invitation-only gathering.

Invitees included contributors to the YMCA’s general endowment fund as well as those who have established a named endowment fund. It is often the case that these funds bear the donor’s name or that of a loved one. Heritage Club membership is also granted to those who have included a gift of any size for the YMCA in their will or estate plans.

The Joy of Giving 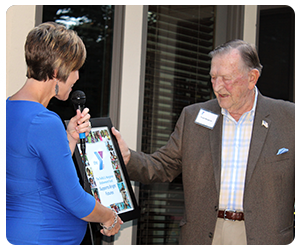 Frank Margaron, retired Joliet businessman and longtime member of the Smith Family YMCA, addressed the crowd about his impetus for creating an endowment fund in the name of his late wife, Twilla. Twilla passed in the summer of 2010, but the endowment fund bearing her name continues her legacy of love, as its annual earnings help fund swim lessons for underserved children in Will County. Frank was honored at the dinner with a photo collage of grateful children who learned to swim at the YMCA this past summer because of Twilla’s fund. 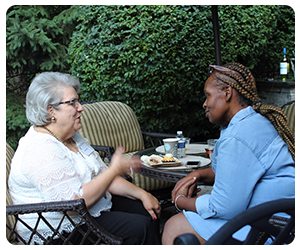 Michele Grocesly recalled the situation for her and her now fourteen-year-old son Don when they came to the YMCA in 2014. They had fallen on hard times and were living in their car. Through the scholarship program—which ensures no one is turned away due to the inability to pay—the Y offered them a place to shower, stay warm and feel a sense of normalcy during an awful situation. YMCA staff also connected her with resources, leading to temporary housing at Morningstar Mission while she pursued culinary studies full-time at Joliet Junior College.

Michele shared her family’s story at the 2017 YMCA Giving Gala, where she made connections with staff at the Bolingbrook Golf Club. Later, when a sous chef position soon opened there, she applied and was hired. The income allowed her to afford a small apartment in Joliet where she and Don are now proud to reside.

Michele was a special guest at the Heritage Club Dinner where she thanked supporters for caring about her family through their darkest time. Unexpectedly, she reconnected there with former middle school teacher, Kathy Macris, now retired and an active volunteer with the YMCA. There were no dry eyes as Michele thanked Kathy for seeing something special in her, lighting a spark and drive that has carried her through her trials.

Endowment and estate gifts support the YMCA and the communities it serves by fund life-changing programs for years to come. To establish a named fund, a pledge of $10,000 or more may be spread over three years. Gifts to the general Y endowment are also welcome, with investments of $2,500+ recommended for the Heritage Club. Outright gifts, pledges and stock contributions are accepted.