You are here: Home / Archives for Summer Day Camp

As a long time provider of before and after school care in Will County, the Greater Joliet Area YMCA has the distinct pleasure of working each day with youth in our communities. As our community continues to navigate through this public health crisis, the Y is teaming up with local school districts to support area families and students during remote learning this fall through its Kid Zone PLUS program.

These efforts would not be possible without the support of local organizations like the Community Foundation of Will County, which recently awarded the Y a $15,000 grant in support of the YMCA Mission Strong Fund.

The Mission Strong Fund was established to help ensure the long-term sustainability of the YMCA in the wake of our COVID-19 related closure and aid continued community service efforts after our reopening. The Community Foundation’s grant will support multiple Greater Joliet Area YMCA youth development initiatives including:

The Y would like to thank the Community Foundation for its generous donation.

To pledge your support for these programs through a charitable gift to the Mission Strong Fund, click here.

YMCA Summer Day Camp provides kids with opportunities to have fun while building a healthy spirit, mind and body. Kids have the opportunity to find new talents, try new activities, gain independence, and make lasting friendships and memories. These experiences would not be possible without the support of our generous charitable partners.

That is why the C.W. Avery Family YMCA would like to thank the NASCAR Foundation for a $9,250 grant through its Speediatrics Grant Program which helped to support the promotion of healthy lifestyles for kids in summer camp this year.

“By engaging in fun games and activities during the day at camp, kids learned that physical activity is fun and exciting and that a healthy lifestyle can make them stronger, help them to have more energy, and feel their best,” Stawikowski said.

Activities culminated in a Speediatrics Fun Day Festival that allowed kids to participate in fun outdoor games and challenges. Stawikowski said campers enjoyed the festival and that Speediatrics programming was an amazing addition to the Y’s summer day camp program in Plainfield.

“It kept the kids excited to come back to camp each day in anticipation of what we had planned for them next,” she said. “Everyone who helped plan the program went above and beyond to make it as easy as possible for YMCA staff to facilitate the step challenge and daily activities. We truly appreciate all of the work that went into providing this great program at our Y.”

Through its commitment to youth development, the C.W. Avery Family YMCA nurtures the potential of every child through its summer day camp and Kid Zone PLUS before and after school programs. Parents can learn more about Kid Zone PLUS for the 2020-21 school year  by clicking here. To pledge your support for these programs through a charitable gift to the Mission Strong Fund, click here.

YMCA Summer Day Camp offers an exciting and engaging adventure where young people can make new friends while having a whole lot of fun! At Y camp, kids laugh, learn, explore and grow, while creating memories and friendships that last a lifetime. And providing a safe and meaningful camp experience would not be possible without the support of local partners like the Community Foundation of Grundy County and its donor advised fund holders.

The Foundation awarded a $5,000 grant from the Gerald D. Abel Endowment Fund to the Y’s Mission Strong Fund to help the Morris Community YMCA operate summer day camp, providing funding for additional expenses resulting from the COVID-19 public health crisis. Through the Foundation’s network of donors, another $5,800 was granted to help meet camp needs. Special thanks are given to Joan Eslinger as well as Jack and Karen Hynds of Morris for supporting the Y through their respective donor advised funds at the Foundation.

The Mission Strong Fund was established to help ensure the long-term sustainability of the YMCA in the wake of our COVID-19 related closure and aid continued community service efforts after our reopening. The Community Foundation’s grant helped support multiple youth development initiatives at the Morris Community YMCA including:

Through its commitment to youth development, the Morris Community YMCA nurtures the potential of every child through its summer day camp and Kid Zone before and after school programs. To pledge your support for these programs through a charitable gift to the Mission Strong Fund, click here.

We are so glad to welcome children to YMCA Summer Day Camp in 2020! Our camp team has spent countless hours planning and preparing for camp season to begin, and we are so excited to welcome our campers back starting on Monday, June 29.

Although our summer day camp programs will look a little different this year, we remain dedicated to providing all YMCA campers and their families with a healthy and safe camp experience, full of fun and wonderful memories.

The Greater Joliet Area YMCA’s summer volunteer program helps young adults gain meaningful work experience while providing extra care to our summer campers. We are proud to say that in 2019 the program’s size and impact grew significantly from the previous year.

The total number of volunteers this summer expanded from 35 to 69, and this hard-working group provided 325 more hours of service than in 2018. Volunteers not only helped in day-to-day summer camp activities, but also lent a hand in the Y’s summer pre-school and sports camps.

“The group of teens we had this summer were great. We had a number of returning volunteers who were able to show the new volunteers “the ropes” so it made it much easier for all to adjust and know just what to do to help,” Volunteer and Development Operations Manager Dori Fugate said.

Children who attend YMCA summer camps participate in a wide range of learning opportunities. Volunteers play a pivotal role in delivering these educational activities throughout the summer.

Fugate noted that the Y is flexible to the needs and availability of volunteers and that the program’s overarching goal is to help young adults maintain a connection with the community.

“Volunteering is such a great way to have a positive influence on our youth and goes a long way for our volunteers when they get ready to embark on college and enter the workforce in the future,” Fugate said. “I hope that our teens gain a sense of purpose when they volunteer and know that they’re making a difference in the lives of others within our Y and within our community.”

Fugate said that she is hoping to see the program continue to grow and that the Y can build a long-term relationship with volunteers.

“We are providing a chance for our teens to build new skills, take on new challenges, make new friends and just have fun, all of which is key as we develop our future young leaders. We are hopeful that our volunteers return to us to volunteer for us in a greater capacity or join us some day as employees,” Fugate said.

To sign up for our summer volunteer program, click here. Learn more about other ways you can volunteer at the Y by visiting our volunteer webpage.

Sophia is a bundle of energy and one of her biggest strengths, according to her mom, Carley, is her glowing attitude that radiates toward others. Although Sophia was born with cerebral palsy, which does present some limitations, her friendliness and positive spirit is contagious.

“I first heard about camp through a flyer at Sophia’s school,” Carley said. “She had done some YMCA activities in the past, like going to the Galowich Family YMCA for swim lessons. She does have cerebral palsy so it’s sometimes hard for me to take her to places like the park. For her to be able to be involved in things with kids her age is very important to me. The Y offers her those activities.”

Before camp started, Carley discussed Sophia’s potential needs with Morris YMCA Youth and Family Director Sarah Porzel. Because Sophia uses a walker, Carley wanted to make sure that Y staff would be able to nurture her level of independence while she was attending camp.

“I didn’t have to make too many extra arrangements,” Porzel said. “We just wanted staff to be vigilant around the play area or stay back in case it took Sophia a little longer to get places.”

Carley noted she was grateful for the receptive nature of the staff.

“They were more than accommodating. One of the counselors had been an aid for her at the school she goes to. That was helpful,” she said.

And, her fellow campers and Y staff were just as thankful to have Sophia participating in daily activities.

Led by Sophia’s example, Porzel said other campers developed the important traits of respect and generosity.

“I think the coolest part of her being in camp this summer was seeing how the kids rallied around her. She was one of the reasons camp was so awesome this year. Her fellow campers were always willing to lend a hand when she needed it,” Porzel said.

Carley said the relationships Sophia built made it tough to say goodbye when the summer ended. 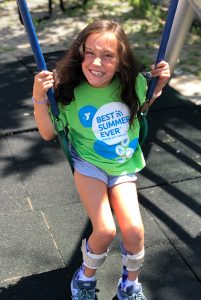 “On more than one instance, four o’clock would roll around and sure enough she wouldn’t want to come home because she was having so much fun,” Carley said. “I was really pleased with the way it was organized. The weekly field trips were awesome. Sophia really enjoyed those.”Looking toward the future, Carley said she is excited to continue a relationship with the Y.

“Now that school has started, I’ll be looking to see what other programs the Y offers. Sophia really wants to be involved in more. She already can’t wait for camp next year,” Carley said.

Registration for the Y’s 2020 summer camp programs will open in March.