Students in the Greater Joliet Area YMCA’s Teen Achievers program joined Y staff on Tuesday afternoon at Joliet West High School to accept a $10,000 grant from the Midland States Bank Foundation. The occasion marked the fourth consecutive year in which the Midland States Bank Foundation chose Teen Achievers as a recipient of these generous funds through a competitive grant process.

“Our Y is committed to helping young people succeed. It’s at the core of our mission. The Teen Achievers program has proven to be effective, working in complement with parents and schools to help students set and achieve their personal and educational goals,” Greater Joliet Area YMCA President and CEO James Watts said.

Tuesday afternoon’s check presentation coincided with an after school workshop that focused on helping students solidify their vision for the future.  While sharing their personal experiences, many students mentioned a desire to achieve high levels of academic success while describing their intended career paths. Other students in attendance expressed an interest in expanding their community service efforts before graduating.

Greater Joliet Area YMCA Metro Board Member and Midland States Bank Senior Vice President of Banking Dan Stevenson presented the check to the students and shared words of support. He expressed his excitement about the progress shown by students in the Teen Achievers program and reiterated the importance of maintaining a strong vision for their future, both personally and professionally.

“Generosity of this magnitude guarantees that our students will be exposed to experiences, interactions, discussions and people that could potentially change the trajectory of their lives,” said Teen and Young Adult Advancement Manager Kelsey Kruel. “People have an idea of the impact this program can have on individual students, but when we think of the effect it could have on the greater community and the systems our students are currently a part of, a gift like this one becomes that much more powerful.”

One of the Y’s most beloved programs, Teen Achievers provides area high school students with the guidance and support they need to discover their identities, embrace their passions, and become their best selves. With the support of the Y’s dedicated Teen and Young Adult staff team, students learn to manage their stress, time, and emotions, and learn about the importance of making confident and wise decisions during their high school years. Through weekly conversations, informative guest speakers, and college visits, students learn about life after high school and receive the encouragement to, not just complete twelfth grade, but to be truly prepared for whatever comes next.

Offered at five area high schools across Will and Grundy Counties, the Teen Achievers program now serves approximately 175 students  Programming is free or offered at a modest fee, though no one is turned away for the inability to afford the experience. Contributions from grantors, the community, and the United Way of Will County help to underwrite the YMCA’s investment to provide Teen Achievers.

The Greater Joliet Area YMCA’s Holly, Jolly, Merry and Bright Celebrity Bartender event brought out the spirit of the holiday season as guests gathered to raise funds and awareness for the Y’s Teen Achievers Program.

Offered in five area high schools, Teen Achievers provides students with the guidance and support they need to discover their identities, embrace their passions, and become their best selves. Proceeds from the evening will go toward programming that includes weekly lifeskill workshops, as well as college visits geared toward helping students achieve their goals and develop as future leaders.

Special thanks to the following individuals for their raffle donations in support of the program:

At the Y, we are focused on providing valuable life experiences for all in our community. It is why we ensure no one is ever turned away due to the inability to pay. Last year, the Greater Joliet Area YMCA provided $1.5 million in financial assistance to help serve 9,100 individuals who would not have otherwise had the opportunity to utilize our programs and services.

These efforts would not be possible without the help of generous donors and a year-round fundraising effort. As our Annual Campaign looks to close 2019 on a high note, we shine a spotlight on an area of fundraising which is becoming more popular each year: social media.

Last month, YMCA Metropolitan Board Member Veronica Gloria teamed up with her twin sister Isabel to help raise $1,240 for the Smith Family YMCA through a special birthday Facebook fundraiser. You can you can learn more about Veronica and why she chooses to support the Y in the Q&A below:

Q: What inspired you to create a Facebook fundraiser for the Y?

Every year instead of asking for birthday gifts, my sister and I ask our friends and family to help us support different non-profit organizations in our community. I’m on the Metro Board of the YMCA and my sister works with the Joliet Township High Schools where she has seen and heard great things about the Teen Achievers program. So when we talked about which non-profit would make the most sense this year, we thought that the YMCA would be an excellent choice.

We ultimately chose to support the Smith Y specifically because we had heard about the great work they are doing to help students from the Fairmont School District learn to swim in the Safety Around Water program. Neither my sister nor I learned to swim as children, so we thought why not help other kids be able to learn to swim or get scholarships to access the great programs at the YMCA.

Q: What was it like to see donations being made?

The really cool thing was seeing the way people responded. Some we consider close friends, others we might have only met once or twice in person. That’s the best part of Facebook. We were able to share this message with people as far out as Seattle and as close as a couple blocks down from the Y.

There was one classmate of my sister’s who donated $100 having never been to the community but believing in what we do and what we were sharing. We did end up raising the goal several times as we kept reaching the new one set. We started with around $700 and then we got to $1,000, $1,100 and it ended up being a little over $1,200.

Q: What have you learned about the Y from being a member of the Metro Board?

Even though I didn’t have the same Y story has some others on the board, who have grown up at a Y and go there regularly, the team was really welcoming. It’s amazing that we don’t turn families away because they can’t afford our services.

Whether it is through Teen Achievers or our Before and After School Kid Zone Programs, there is really a commitment to the community at every level.

Q: What suggestions would you have for people interested in starting a Facebook fundraiser for the Y?

I would recommend that when people consider an online fundraiser, especially through Facebook, that they consider supporting local agencies. You can donate to larger organizations, and giving to those organizations is valuable, but there really is nothing like helping an organization that can help your neighbors and others in your community.

This is both fundraising and ‘friendraising.’ Not all folks can give, but seeing stories that people post really help raise the visibility of the YMCA and inspire others. I would also suggest posting regular updates and thanking people as they donate.

You can make a donation to the YMCA by supporting a Facebook Fundraiser at your local Y branch:

You can also learn more about starting your own Facebook fundraiser for the Y here.

This year you have an extraordinary opportunity to help make our community better. Giving Tuesday is December 3 and you can join the movement to give to the Greater Joliet Area YMCA.

#GivingTuesday is a day dedicated to giving back. Coinciding with the Thanksgiving Holiday and the kickoff of the holiday shopping season, #GivingTuesday’s goal is to inspire personal philanthropy, volunteerism, and encourage bigger, better and smarter giving during the holiday season.

Yes! Your gift on #GivingTuesday will benefit our scholarship assistance program, which helps to ensure that no one is turned away from the Y due to the inability to pay. With your help, local families will have the opportunity to experience a variety of YMCA programs—from group fitness classes to before and after school programs, and everything in between. 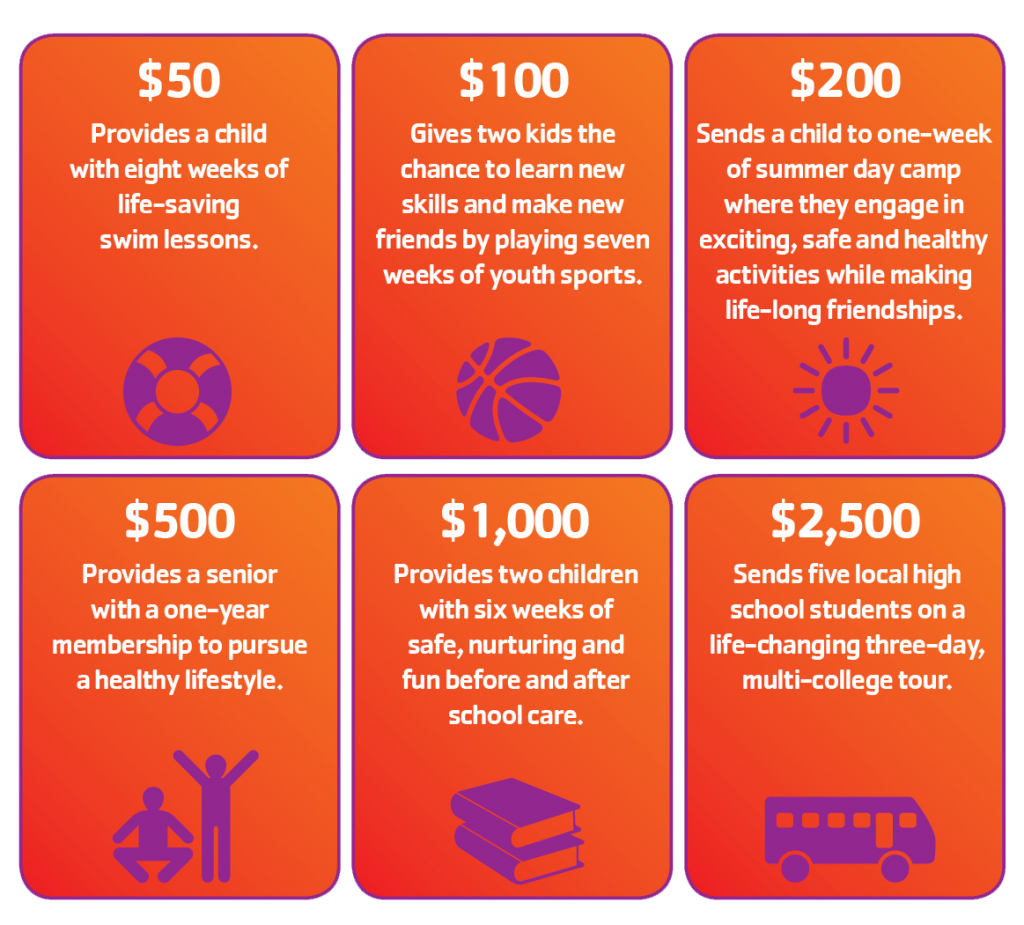 You can #BeTheGood and make a difference in the life of Y family. Every gift matters. Everyone has a role to play. Together, we can achieve so much more.

TWO WAYS TO GIVE

Join us as at the The Dock at Inwood as we celebrate the holiday season and raise funds for the YMCA’s Teen Achievers Program! Area celebrities will be behind the bar to spread holiday cheer and all tips, raffle proceeds, and 10 percent of the day’s food sales will benefit the YMCA.

The Dock at Inwood

One of the Y’s most beloved programs, Teen Achievers provides area high school students with the guidance and  support they need to discover their identities, embrace their passions, and become their best selves. Students learn to manage their stress, time, and emotions, and learn about the importance of making confident and wise decisions during their high school years. Through weekly conversations, informative guest speakers, and college visits, students learn about life after high school and receive the encouragement to, not just complete twelfth grade, but to be truly prepared for whatever comes next.

In today’s fast-paced world, it is so important to find time to slow down and enjoy the company of the people we are blessed to know and love. So often, we get caught in the hustle of our everyday lives, and before we know it, we are getting ready to turn the page on the calendar for the new year ahead. The holiday season is the perfect time for gratitude and reflection, and we want to thank everyone who plays a part in helping the Y serve our community.

At a time when many people are considering year-end gifts, we invite you to make a contribution to the YMCA. Your gift will support our BE THE GOOD Annual Campaign, which helps to ensure that no one is turned away from the Y due to the inability to pay. Please know that your gift this holiday season will help change the lives of people living right here in our community including:

You can stop by your local Y to pledge your gift or submit a gift online. As a 501(c)(3) non-profit organization, all gifts to the YMCA are tax-deductible.

Thank you for your careful consideration to support the Y and its mission. Donate to the Y today!