You are here: Home / Archives for Volunteers

As the year draws to an end, we are excited to highlight one of our most dedicated volunteer leaders. Nick Macris, who will wrap up his two-year term as chairman of the Greater Joliet Area YMCA Board of Directors this month, has been instrumental in helping the Y navigate through some of the most challenging times in our organization’s history.

“I have so much pride for what we do here. We set a high standard and we do things right,” Macris said. “That comes from hard working leadership, staff members, volunteers, donors and members. It really stands out when we compare our association to any other across the state or nation.”

Macris, a Joliet native, attended Joliet West High School and graduated from the University of Illinois with a degree in Architecture before going on active duty in the U.S. Military. During his time in the service, he obtained a Masters of Public Administration from Webster University and retired with the rank of Lieutenant Colonel in 1995. Macris spent 20 years working for ComEd and briefly worked with the University of St. Francis as Director of Off Campus Admissions.

Since his retirement, Macris said he has focused his attention toward community service, primarily as a result of the example set by his parents.

“My parents really set the stage and were the motivator for me to get involved in volunteerism. My dad did a lot of volunteer work with the Red Cross and the United States Naval Reserves. My mom was very involved with the Women’s Club of Joliet and the PTA. They set a great example for me to emulate,” he said.

Macris has worked with the Kiwanis Club of Joliet and joined the YMCA Board of Directors in 2012. Though he considered himself a Y rookie when his time on the board began, he realized that he had a Y story of his own after all.

“We brought my daughter, Maria, to the Y for swim lessons and she participated in many youth programs at the Y,” he said. “Like much of the community at that time, I thought of the Y as a ‘gym and swim,’ but I quickly learned that we are a non-profit that positively impacts the lives of countless families.”

His passion for the Y’s mission grew with each year and he eventually stepped in as chairman of the Board in January 2020. The COVD-19 pandemic put forth challenges almost immediately, but flexibility and ingenuity helped keep the leadership team engaged.

“I really felt like it was important to build a sense of team, even in a virtual world,” Marcris said. “One of the things we did was to introduce every virtual board meeting with a celebration of success. We wanted to ensure we highlighted all the positive things that were going on professionally and personally for all the members. I also started to put out a virtual newsletter to ensure we were highlighting the important work our organization was doing.”

Macris said he was incredibly proud of staff efforts to organize virtual and outdoor programming during the Y’s three month closure.

“Despite the pandemic, despite the closure, despite all the challenges, we weathered the storm. We didn’t just survive, we thrived. It’s amazing what this organization has been through and we are coming out smarter, stronger, and brighter in a lot of ways,” he said.

“Jim did an amazing job for nine years and I wanted to emphasize maintaining the culture of excellence that exists throughout this association. After a nationwide search, the qualifications of our very own Katy Leclair exceeded that of all the highly qualified candidates. We were thrilled to promote her to CEO,” he said.

“The impact that we have on children’s lives, students’ lives, and subsequently the lives of families, is very near and dear to my heart,” Macris said.

Macris emphasized that many youth development programs at the YMCA would not be possible without the support of charitable giving, and he was particularly inspired by the generosity shown by attendees at the YMCA Gala in October. The event netted more than $205,000 for the Mission Strong Fund, helping to ensure that nobody is turned away from the Y due to the ability to pay.

“It was an amazing success. Those who donated demonstrated how much they had a connection to us and what our mission is,” he said.

Moving forward, Macris will maintain a position on the Board of Directors, and the Y is grateful for his continued support.

“The strength of the Y rests in the hearts and hands of the volunteers, staff, and donors who choose to serve. During his tenure as Board Chair, Nick Macris showed that when you lead with your heart, anything is possible,” said Y President and CEO Katy Leclair.

Macris said he looks forward to continued progress with the Morris Community YMCA’s Capital Campaign, as well as integrating new ideas with the culture of success that has helped the Y serve communities throughout Will County and Grundy County for nearly 100 years.

“The future of this Y is nothing but bright. It’s going to get better and stronger,” Macris said. “We’ve got a great group of people leading this organization. I’m thankful for the Y, and it’s been my honor to serve as Board Chair.”

On behalf of all of our members, volunteers, community partners, and the Y’s staff team, we thank Nick for his generosity, service, and leadership. 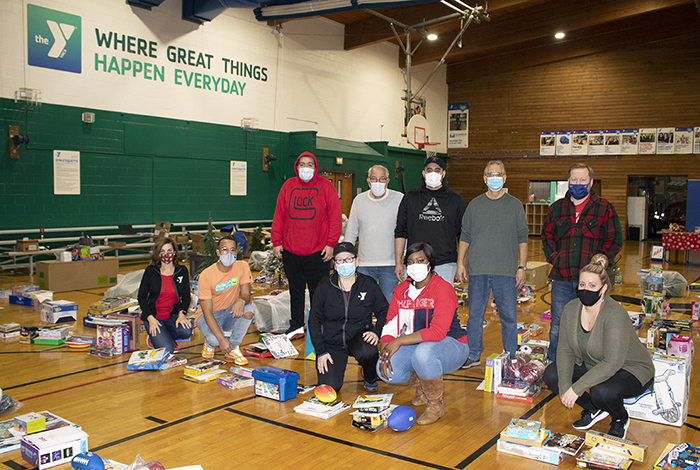 The Greater Joliet Area YMCA has been proud to once again serve as a Toys for Tots collection and distribution site in 2021. As the largest distribution organization in the area, the Y sorts through several thousand toys each holiday season. Last week, volunteers came together at the Galowich Family YMCA to prepare gifts that will provide a memorable Christmas for more than 600 children in need in our community. From action figures and books, to basketballs and board games, these generously donated gifts were collected in partnership with the United States Marine Corps Reserve.

On behalf of the Y and all the families we served this year, we’d like to thank the following individuals and organizations for their amazing support with Toys for Tots this year:

For more information about Toys For Tots in our area, click here.

When kids play sports, they do more than just exercise. Besides being physically active, they develop higher self-esteem, perform better in school and work better in groups.  Youth sports programs at the YMCA teach kids the fundamentals of the game while emphasizing the importance of teamwork. Above all, kids who participate in YMCA youth sports have a lot of fun.

And now, due to popular demand, we are excited to extend our fall sports leagues sale at the C.W. Avery Family YMCA! Register for fall soccer, flag football, or t-ball through July 31 and SAVE $10!

Valid at the C.W. Avery Family YMCA. Limit one per member, per league. Cannot be combined with any other offers. Some restrictions may apply.

As a reminder, facility and community members from all Greater Joliet Area YMCA branches are eligible to participate. Learn more and register below:

When kids play sports, they do more than just exercise. Besides being physically active, they develop higher self-esteem, perform better in school and work better in groups.  Youth sports programs at the YMCA teach kids the fundamentals of the game while emphasizing the importance of teamwork. Above all, kids who participate in YMCA youth sports have a lot of fun.

And we are so excited for the return of fall sports leagues at the C.W. Avery Family YMCA! Registration is currently underway, and you can learn more about available leagues below:

On February 4, 2006, the C.W. Avery Family YMCA opened its doors for the first time on Wallin Drive. And for the last 15 years, it has truly been a privilege to serve our members and the Plainfield community.

To commemorate this milestone, the C.W. Avery Family YMCA teamed up with the Plainfield Area Chamber of Commerce to host a celebratory ribbon cutting this morning at the Y. Although most guests participated in the event virtually, we were honored to have many special guests on hand to commemorate the day.

Watts shared a summary of the Y’s history in the Plainfield community and acknowledged the tremendous support the Y continues to receive from its community partners, volunteers, and incredible staff team.

C.W. Avery Family YMCA Executive Director Lisa Behounek then spoke about her own YMCA career, which began with a Y internship in 2000. Behounek joined the team at the the C.W. Avery Family YMCA as Fitness Director in 2006. She thanked the Advisory Council for their support and recognized the importance of staff contributions over the last year in the wake of the Y’s temporary closure due to COVID-19 last spring.

Maryl Betzwiser, in attendance on behalf of the Clyde and Judy Avery family, gave brief remarks on the impact the Y has had on her family, wishing the YMCA continued success for another 15 years and beyond.

Plainfield Mayor Michael Collins was also on hand and spoke about the impact of the Y’s presence in the Plainfield community. He noted the Y’s state-of-the-art facility as a point of pride for local citizens, and that he looks forward to continuing the strong partnership between the Y and the Village.

On behalf of the YMCA, we would like to thank everyone involved in helping us reach this 15th anniversary milestone. Our efforts would not be possible without the hard work of our dedicated staff, the assistance of volunteers, the kindness of donors, and the continued support from all of our members. We look forward to celebrating throughout 2021. We know that the best is yet to come!

The Greater Joliet Area YMCA has been proud to once again serve as a Toys for Tots collection and distribution site in 2020. As the largest distribution organization in the area, the Y sorts through several thousand toys each holiday season. This week, volunteers came together at the Smith Family YMCA to prepare gifts that will provide a memorable Christmas for over 1,000 children in need in our community.

From action figures and dolls, to Legos and board games, these generously donated toys were collected in partnership with the United States Marine Corps Reserve. The Y would also like to give special thanks to Exxon Mobil, which donated over 100 presents in addition to providing support with volunteer efforts, as well as volunteers from Walmart for their invaluable service.

For more information about Toys For Tots in our area, click here.