You are here: Home / Archives for Youth Development

YMCA youth sports programs maximize the positive effects of athletics by emphasizing healthy competition and promoting teamwork. The Y focuses on the life lessons that can be learned from sports, and our coaches strive to instill a positive self-image in each player. This spring the Galowich Family YMCA is excited to offer a new Spring Soccer Strikers program for kids ages 8-14. This program will focus on player skill development with a scrimmage/showcase scheduled for the final week of activities.

PLEASE NOTE: Masks will be required.

Space is limited, so register today!

If you have any questions about YMCA youth sports, please contact:
Stephen Franklin
Youth and Family Director
(815) 744-3939, ext. 315
[email protected]

The C.W. Avery Family YMCA offers programs for children when school is not in session. During holiday breaks, children are invited to the Y for days full of fun and adventure.

Children, grades K-8, may be signed in at the C.W. Avery Family Y as early as 7 a.m. and signed out as late as 6 p.m. All participants should dress for the weather, bring a sack lunch, a drink and snacks, and a bathing suit and towel. Advanced registration is required and space is limited. Fees are non-refundable. The registration deadline is the Wednesday prior to that week’s programming.

Because the safety of our community remains our toppriority, we have made modifications to our policiesand programs to facilitate new safety and social distancing guidelines. To maintain a healthy and safe environment, all Winter Break Camp participants and staff will be required to adhere to strict health and safety guidelines, including:

The Morris Community YMCA invites the community to take part in a fun series of youth events during Spring Break! These activities will cover a wide range of interests, so sign up today! Registration must be completed 48 hours in advance of the event you are planning to attend. Learn more below:

March 30: No Bake! It’s a Piece of Cake
Learn how to craft a special sweet treat.

March 31: Canvas Creations
Create a unique painting to keep or give to a loved one.

April 1: STEM Challenges
Put your knowledge and problem-solving skills to the test.

Cost (Per session):
$10 for Facility Members
$15 for Community Members

For nearly 95 years, the Greater Joliet Area YMCA has worked to bring about meaningful change in the community. As a result of the ongoing global health crisis, the YMCA has been challenged to reimagine the ways it delivers services to the community.

After months of thoughtful consideration, the Greater Joliet Area YMCA announced today that its Board of Directors has made the difficult decision to permanently close the Smith Family YMCA, located at 1350 S. Briggs Street in Joliet. The last day of operations at the Smith Family YMCA will be Friday, March 26.

“The challenges of the past 12 months have provided our YMCA with an opportunity to take a long, hard look at the programs we offer in the Joliet community. The Smith Family YMCA has proudly served residents of Joliet since 1978, but in recent years, its most impactful programs have operated outside of our YMCA walls and in the community,” said Greater Joliet Area YMCA President and CEO Jim Watts.

In the coming weeks, existing Smith Family YMCA programming will be relocated to sites throughout the Joliet community. Two of the YMCA’s largest youth development programs, including its Before and After School Kid Zone and Summer Day Camp programs, will be moving to the Salvation Army Building in downtown Joliet. Additional YMCA programs will be relocated to other community locations in the months ahead.

“We are excited to partner with area churches, local school districts, and other like-minded community organizations, like the Salvation Army, to make YMCA programming more accessible for Joliet residents. By relocating our most impactful programs to neighborhood locations, we hope to remove the barriers that may have prevented residents of all ages, but especially area youths, from utilizing our facility on Briggs Street,” said Watts.

Beginning on March 27, Smith Family YMCA members will transition to the Galowich Family YMCA, located at 749 Houbolt Road in Joliet. All employees at the Smith Family YMCA will have the opportunity to continue employment with the Y by moving to a new community program site or one of the Greater Joliet Area YMCA’s facilities in Joliet, Morris, or Plainfield.

“Although we are very sad to be retiring the Smith Family YMCA building, we are excited to write the next chapter of the Y’s storied history in the Joliet community. At the YMCA, our mission lives within the hearts of our members, volunteers, and staff, and we know that the spirit of the Smith Family YMCA will live on in our programs for generations to come. We remain committed to providing a YMCA experience for all and serving the Joliet community,” added Watts.

Let your creativity shine and plan to participate in the YMCA’s Easter Egg Coloring Contest! Open to children ages, 5-12, this contest is the perfect opportunity for kids to show off their artistic talents and help spread a little Easter cheer.

1. Download the blank Easter Egg template below and print it out. You may also create a template of your own, just be sure to include a Y logo in your design.

2. Grab some crayons, markers, colored pencils or paint and create an Easter Egg design that you think will inspire the community. From pastel colors and bunnies, to chocolate candies and spring flowers, we can’t wait to see your original designs!

3. Design can be submitted in the drop-off box at the membership desk of your local Y branch. You can also submit your design through a message to your local Y’s Facebook page or send an e-mail to [email protected] Submit your design by Thursday, March 25. Please be sure to include a name and age in the submission.

4. Designs will be posted on the Facebook pages of the three Greater Joliet Area YMCA branches from Monday, March 29 through Thursday, April 1. The designs with the most combined photo reactions from each of the following age groups will receive a $30 gift card to an area restaurant: 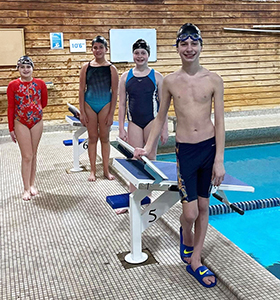