You are here: Home / Archives for YBL

As our 2022 Youth Basketball League (YBL) season draws to a close, we’d like to send our heartfelt thanks to everyone who made this winter such a memorable experience for the youth in our community. With the support of our volunteer coaches and our generous league sponsors, the Y was able to welcome more than 1,000 young athletes back to our beloved YBL program.

At the Y, we know that our youth sports programs help to keep kids physically active. But, as we reflect on this wonderful season, we know that the impact youth sports program have on our young athletes reaches way beyond what happens between the lines on the basketball court. Besides being physically active, kids who play sports develop higher self-esteem, perform better in school, and work better in groups. Our YBL program teaches kids the fundamentals of the game while emphasizing the importance of teamwork. Above all, kids have a lot of fun, which was evident over the last several months on YMCA basketball courts throughout Will and Grundy Counties.

YBL BY THE NUMBERS

The Y would also like to thank all the families, players, volunteer coaches and staff members who participated across our association’s programs, as well as the sponsors who helped make this season possible:

We can’t wait to see everyone on the court next season!

PLEASE NOTE: To ensure the health and safety of our YMCA community, we will follow masking guidance from the State of Illinois to best protect participants, coaches, and staff in our youth basketball programs during the upcoming season.

Every winter the Y brings communities together to promote youth development through our Youth Basketball Leagues. We look to maximize the positive effects of athletics by emphasizing healthy competition and promoting teamwork, and we know 2020 was another great year for area basketball! With the season coming to a close, we’d like to take this opportunity to share some of the key facts and figures from this YBL season. You can take a look at these inspiring numbers below: 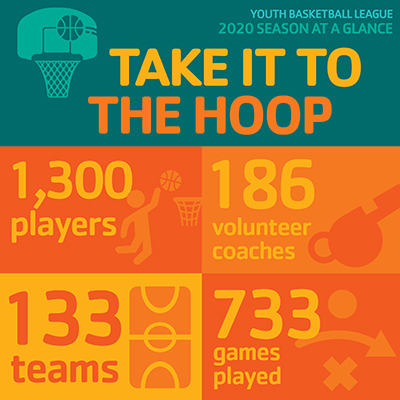 The Y would also like to thank all the families, players, volunteer coaches and staff members who participated across our association’s programs, as well as the sponsors who helped make this season possible:

We can’t wait to see everyone on court next season!

Saturday will mark the final time Morris Community YMCA Sports Manager Ken Iverson participates in a Youth Basketball League (YBL) weekend. And when Ken thinks about his last day, he can’t help but think of his own childhood.

“I fell in love with the game of basketball when I was just a boy,” Ken said. “My dad, a Norwegian immigrant, had never played the game, but he put a hoop up for me. Just a piece of plywood sitting on a pole. I went out and shot on a slanted driveway and just played and played.”

Iverson, a Morris native, has been a fixture in the community’s sports scene for more than 40 years and his passion for basketball burns with the same intensity as it did when he was a kid.

“I can remember sitting on the steps of the bleachers at Morris High School games because there was nowhere else to sit. People were screaming and yelling and I thought it was the coolest thing I had ever seen in my life,” he said.

Ken would go on to play at Morris High School and also got a chance to walk-on at Western Illinois University. He returned home to coach middle school basketball throughout the 70s, 80s and 90s and, after retiring in 2005, he was approached to help expand the Y’s presence in Morris.

“We started off with the youth programs, which was my wheelhouse. I’ve been doing that all my life,” Ken said. “But it’s also been rewarding to expand programs to adults and seniors.”

YBL’s growth under Iverson’s leadership opened the door for more sports programming and eventually the Y’s expansion into its current downtown Morris location. Ken played a role not only scouting locations for the Y, but also recruiting the likes of Executive Director Missy Durkin to join the Y team.

“Over the past six years it’s been an honor to work with Ken and watch his passion for the Y continue to grow,” Durkin said. “I can’t even begin to imagine how many lives he’s touched through his Y career from YBL and adult leagues, to fishing camp and more. We’re grateful he is not retiring just yet, but we know he will be deeply missed in the gyms next year when YBL resumes.”

After 14 years, Ken still relishes his opportunities to make an impact at the Y, particularly working with kids.

“I’m convinced the reason sports are so important is because of the life lessons you learn for outside the game. It’s about never giving up, hanging in there, always trying your best. For kids, there are virtues that are better learned in this environment than anywhere else,” he said.

Ken is also excited for the future of YBL having worked with Chris Interial, who was named the Y’s new Sports Director last summer.

“Chris is amazing. I was worried about who was going to come in for me and now I think they might just forget all about Mr. I. Chris is going to take what we have started here and run with it. He’ll make it even bigger and better,” Ken said.

Iverson shared that it has been a tremendous joy to make a difference in his hometown.

On behalf of all the athletes, coaches and staff members who have participated in our Morris YBL program, we would like to thank Coach I for his passion and dedication to the Y and the game of basketball. If you would like to help celebrate Coach I’s last YBL weekend, feel free to stop by Morris Grade School this Saturday. Games begin at 9 a.m. and will continue throughout the afternoon.

Ken Miller will close out his final season as the YMCA’s Coal City Youth Basketball League (YBL) Coordinator this Saturday, bringing an end to an incredibly successful five-year run with the Morris Community YMCA.

Ken joined the Y staff prior to the start of the 2014-15 YBL season after 33 years in education. He served as an administrator in Coal City Unit School District 1 for more than a decade, coached high school football for 14 years (winning a state title in 1993), and also helped coach basketball. Ken said one of the most rewarding aspects of the last five years has been overseeing the program’s continued growth in Coal City.

“The biggest thing is that interest has spread throughout our community. We had over 180 kids participate last year, which was the highest number we’ve ever had,” Miller said. “I have been fortunate to watch the first graders from the first year go all the way through the program.”

Miller’s leadership of the Y’s Coal City youth basketball league has helped to expand the organization’s footprint throughout the community. One of the Y’s most highly visible youth development programs, YBL teaches young athletes the importance of teamwork and sportsmanship while supporting their development in the game of basketball.

“Our primary goal is to make basketball fun for everyone. There are always going to be different skill levels, but one thing you can always do is have fun. Whether at practice or in games, we try to make sure it’s a great experience for all the kids involved,” Miller said.

Miller said he has been proud to work alongside dedicated Y staff members.

“It’s been a team effort. I’ve had total support from everyone at the Y. Any time I’ve ever had a question or concern, everyone has been helpful in making sure our needs in Coal City were met. We all work together, much like a coaching staff would,” he said.

Ken also said he still gets excited when he watches players make their first basket and that inspiring kids is what makes the Y experience so special.

“At the end of the year, I give each of our participants a basketball. One time, we had a third grader who couldn’t be there on the last day to receive the ball. I said ‘Don’t worry, we’ll get it to you the week before’. When he got it he was just thrilled, started crying and gave me a big hug. He had never had a basketball of his own,” Ken said. “Those are the types of things that have made it really neat and the memories I’ll take with me forever.”

The Y is also thankful for everything Ken has brought to YBL.

“As we looked to expand our reach in Grundy County with the YBL program we knew there was one perfect man for the job and that was Ken Miller,” Executive Director Missy Durkin said. “Ken has been an exceptional coach and mentor for young athletes. We are grateful for his dedicated service and leadership and he will be greatly missed around the courts.”

If you would like to help celebrate Ken’s last YBL weekend, feel free to stop by Coal City Intermediate School this Saturday. Games begin at 9 a.m. and will continue throughout the afternoon.

The YMCA’s Youth Sports program maximizes the positive effects of playing sports by emphasizing healthy competition and promoting teamwork. The Y focuses on the life lessons that can be learned from sports and coaches strive to instill a positive self-image in each player. Most importantly, in the YMCA league, everyone plays and everyone wins!

The YMCA relies on the generosity of local businesses to help underwrite the costs of its youth sports leagues through sponsorships. Our Youth Basketball League season will be starting soon and we are inviting any interested sponsors to contact the Y and help support a team. The deadline to submit a sponsorship is December 13.

If you would like to learn more about how your business can make a difference in the life of a young Y athlete, please reach out to your local Y branch: