You are here: Home / Archives for Sports

YMCA sports camps focus on fundamental skills and promote the importance of teamwork and sportsmanship. Each camp is filled with positive activities that encourage campers to participate in active games and team challenges. Our number one goal is to have fun!

And, we are excited to announce two weeks of additional sports camp programming at the C.W. Avery Family YMCA! See below for a full list of upcoming sports camps:

Ken Miller will close out his final season as the YMCA’s Coal City Youth Basketball League (YBL) Coordinator this Saturday, bringing an end to an incredibly successful five-year run with the Morris Community YMCA.

Ken joined the Y staff prior to the start of the 2014-15 YBL season after 33 years in education. He served as an administrator in Coal City Unit School District 1 for more than a decade, coached high school football for 14 years (winning a state title in 1993), and also helped coach basketball. Ken said one of the most rewarding aspects of the last five years has been overseeing the program’s continued growth in Coal City.

“The biggest thing is that interest has spread throughout our community. We had over 180 kids participate last year, which was the highest number we’ve ever had,” Miller said. “I have been fortunate to watch the first graders from the first year go all the way through the program.”

Miller’s leadership of the Y’s Coal City youth basketball league has helped to expand the organization’s footprint throughout the community. One of the Y’s most highly visible youth development programs, YBL teaches young athletes the importance of teamwork and sportsmanship while supporting their development in the game of basketball.

“Our primary goal is to make basketball fun for everyone. There are always going to be different skill levels, but one thing you can always do is have fun. Whether at practice or in games, we try to make sure it’s a great experience for all the kids involved,” Miller said.

Miller said he has been proud to work alongside dedicated Y staff members.

“It’s been a team effort. I’ve had total support from everyone at the Y. Any time I’ve ever had a question or concern, everyone has been helpful in making sure our needs in Coal City were met. We all work together, much like a coaching staff would,” he said.

Ken also said he still gets excited when he watches players make their first basket and that inspiring kids is what makes the Y experience so special.

“At the end of the year, I give each of our participants a basketball. One time, we had a third grader who couldn’t be there on the last day to receive the ball. I said ‘Don’t worry, we’ll get it to you the week before’. When he got it he was just thrilled, started crying and gave me a big hug. He had never had a basketball of his own,” Ken said. “Those are the types of things that have made it really neat and the memories I’ll take with me forever.”

The Y is also thankful for everything Ken has brought to YBL.

“As we looked to expand our reach in Grundy County with the YBL program we knew there was one perfect man for the job and that was Ken Miller,” Executive Director Missy Durkin said. “Ken has been an exceptional coach and mentor for young athletes. We are grateful for his dedicated service and leadership and he will be greatly missed around the courts.”

If you would like to help celebrate Ken’s last YBL weekend, feel free to stop by Coal City Intermediate School this Saturday. Games begin at 9 a.m. and will continue throughout the afternoon.

Playing all those pickup games has finally paid off! Now you, and up to 11 friends, can showcase your skills in the C.W. Avery Family YMCA’s Adult Basketball League. Games will be played on Tuesday and Thursday evenings beginning March 17.

• Games on Tuesday and Thursdays from 7-9 p.m.
• All players must be 17 years or older.
• League Maximum: 8 Teams
• Roster Limit: 12 players
• The season includes eight games, plus playoffs.
• Rosters are due by the first game.
• Each member must play in three regular season games to participate in the playoffs.

If you’re looking for a little friendly competition, the Morris Community YMCA has got you covered! Our Adult Men’s Basketball League is set to run from March 29 to May 31 and registration is now open. Team spots are limited, so get a group of friends together and sign up today!

League Details:
•Games will be played at Morris Community High School on Sundays from 1-6 p.m.
• All players must be 18 years or older.
• League Maximum: 10 Teams
• Roster Limit: 12 players
• Rosters are due by the first game.
• Each member must play in three regular season games to participate in the playoffs.
• Season consists of 8 games plus single elimination playoff. (No games on May 24)

The Morris Community YMCA is excited to announce a new partnership with the Morris Athletic Association (MAA). Beginning in spring 2020, the MAA will transition leadership of its 8 and under youth baseball and softball programs to the YMCA. This exciting new collaboration will provide additional dedicated resources for the community’s T-Ball, Pinto, and 8U Girls Softball programs and expand the Y’s youth sports programs in Morris. Program details can be found below:

Uniforms will not be guaranteed by the first game for those players who register after March 2, 2020. 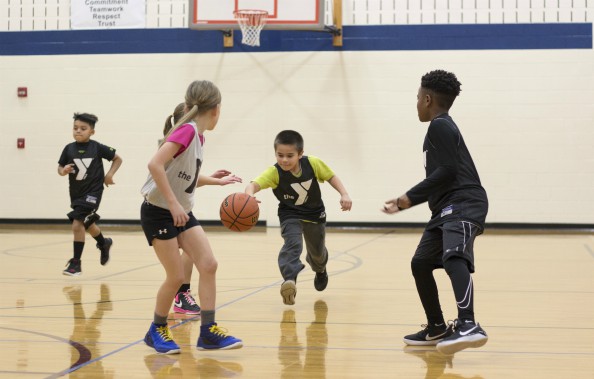 With September being National Childhood Obesity Awareness Month, it’s important for members of all ages to embrace a healthy lifestyle. At the Y, there are a wide variety of classes available for every member of your family. From adult group exercise classes to youth sports, and everything in between, you’ll be sure to find something that fits your family’s needs and busy schedule.

Here are some great tips to help your family incorporate healthy eating and regular physical activity into your fall schedules:

Eat & Drink Healthy: Make water the drink of choice and encourage everyone to fill half their plates with fruits and vegetables by offering two or three colorful options at every meal. As a family, consider choosing a new fruit and veggie every week to taste together. Place a full pitcher of water on the table during meals and allow children to pour their own water. Remember to keep full water bottles available in the car and your children’s backpacks.

Play Every Day/Go Outside: Children should have at least an hour a day of unstructured play outside (when possible) and break a sweat at least three times a week by getting 20 minutes or more of vigorous physical activity. Join your children in games that get your hearts pumping and bodies moving.

Get Together: Eat as a family as frequently as possible. Involve kids in meal planning, preparation and clean up. In addition, adults should take a break from electronics and spend one-on-one time each day with their kids, enjoying one another’s company.

Reduce Recreational Screen Time: Time spent in front of a television, computer, tablet, cell phone or video games should be limited to two hours or less per day. Make a family plan to reduce screen time at home (i.e. turn off screens during meals, charge electronics/screens in the kitchen overnight, go for a walk after a meal, set a timer to remind you to power down the screen).

Sleep Well: Kids and adults need to keep a regular sleep schedule; unwind together in the evenings by reading a book or listening to soft music to ensure the body is preparing for sleep. Kids are growing and need 10-12 hours of healthy sleep per night. Adults should strive for seven to eight hours of sleep a night.

If you’re looking for other ways to keep your children active, the Y’s youth sports programs are a great way to stay fit and have fun at the same time! Registration is currently underway for the Y’s youth basketball program. Open to kids in preschool through high school, the Y’s basketball program teaches kids the fundamentals of the game and the importance of teamwork. Register today and participate in our free clinics to gear up for the upcoming basketball season!