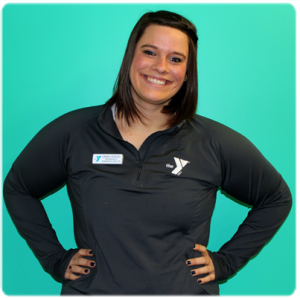 Sarah Porzel, the program and membership director for the new Morris YMCA, has set a lofty goal for 2015: To know each and every member’s name.

Sitting in her office, tucked away in the back of the Y’s aerobics room, she suggests her goal is almost complete and lets out a laugh—probably because the Morris Y, which opened just four weeks ago, already has 1,700 members (and counting).

But if anyone can do it, it’s Sarah, a self-described “Y Geek” who has plans for a lifelong career with the Y.

Sarah first got started with the Y during her time at St. Ambrose University in Iowa, where she had an internship at the Davenport YMCA. After earning a degree in physical education, she spent time at the LaGrange YMCA before finally settling in full-time with the Greater Joliet Area YMCA.

In under two years as the C.W. Avery Family YMCA’s youth and family coordinator, Sarah introduced a variety of new programs to the Y, while also taking the lead on summer day camp, one of the Y’s largest youth programs, as well as the Fab 50 Club, an increasingly popular social program for seniors. Then in December 2014, Sarah accepted her new role at the Morris Y.

“I got bit by the Y bug,” she says. “I get up everyday and I’m happy to go to work. I love who I work with. I love the members. I love that I get to come into work and not feel like I’m working.”

From Monday to Saturday, you can find Sarah at the Y. Sometimes, she mans the Membership Desk, interacting with members and answering questions. Other times, she stays behind the scenes, developing new programming for youth, teens, adults and seniors.

In fact, some of those programs are set to officially premiere at the Y next week.

“The fact that I can basically create these programs—ones that I always wished I had when I was little—and give them to the community is probably one of the best feelings in the world,” she says.

Starting February 9, the Morris Y will begin offering preschool programs such as “Tiny Tot Two’s” and “Fine Motor Fun,” among many others. Youth programs set to begin include “Lego Mania” and “Little Artists.”

The best is yet to come, however. Sarah says a lot more programs are in the works for 2015. While she didn’t dive into specifics, Sarah did mention that she just placed a big order for tumbling equipment.

“What we have going on here is pretty amazing,” she says.

With Sarah leading the way, we wouldn’t expect anything less.