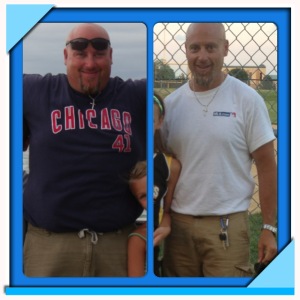 As he worked towards his goal, John began to grow a beard, vowing not to shave until he lost a total of 65 pounds. As the months went by, the pounds shed, and the beard grew—becoming a popular subject among the Y staff. His routine evolved, too, as he scaled back on the cardio and began lifting more weights. Aside from his daily workout, John changed to a diet that consists mainly of turkey, chicken, tuna, fish and water. A whole lot of water, he says.

“The bottom line is food and exercise,” he said.

By April 2013, right around the start of baseball season, John, equipped with a full, bushy beard, reached his target weight goal. When asked about what keeps him motivated, he had a couple answers. First is the fact that he can finally keep up with his children, Grace, 11, and Tyler, 14, who both play sports. Second is a fellow member named George, John’s new 86-year-old pal, who works out at the Y six days a week.

John, himself, continues to visit the Y five days a week. His dedication, however, extends beyond his time at the wellness center.

In September, John participated in a fundraiser for a family friend, where he climbed the steps at the Sears Tower in 24 minutes, beating his goal of 25 minutes. In preparation of the event, he and his wife, Cindy, began climbing the stairs at Swallow Cliff, an old toboggan hill in Palos Park. He and Cindy return to Swallow Cliff each weekend, climbing up and down the set of 125 stairs. Typically, John says, he goes up and down between 15 and 17 times, and follows the climb with a four mile run.