You are here: Home / Blog / The Unmatched Resilience of Angie Manheim 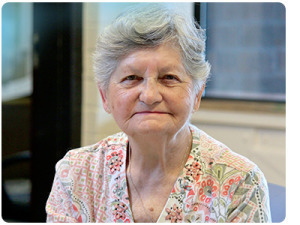 At age 36, Angie Manheim, a mother of five from New Lenox, was diagnosed with arthritis. Year by year, her condition worsened, and by age 50, her mobility had decreased significantly. Her kids, Angie recalled, had to take care of her.

“I couldn’t do anything for myself,” she said. “It’s been a long, hard ride, believe me.”

While on a family vacation in the Lake of the Ozarks, Angie made a life-changing discovery: Swimming relieved the pain. Suddenly, her joints were no longer stiff.

Luckily, back home, a brand new YMCA had just been built—the Smith Family YMCA on Briggs Street—complete with a swimming pool. When she returned, signing up was a no-brainer. Angie began using the pool regularly and her health steadily improved.

“After about eight months, the staff saw how it helped me and asked me if I’d run a class,” Angie said.

Despite having any prior experience teaching, she agreed.

“My first group had 12 people,” she said. “I would just go through the motions I had gone through, and before you know it I had over 60 people.”

That was 37 years ago. Today, the class, now known as Rusty Hinges, remains an incredibly popular program among seniors who have arthritis and other ailments. Angie, at 87-years-old, still leads class three days a week.

For one hour, Angie guides participants through movements that are comparable to aerobic exercises, only slower and more relaxed. It’s important that the water is warm—at least 84 degrees—to ensure flexibility.

“In the water, you’re more buoyant and you’re not putting as much pressure on your joints,” Angie said. “This way, you can exercise and not feel like you’re pushing yourself too hard.”

The impact of Rusty Hinges has been enormous. Countless rehabbed participants have come and gone over the years. Angie has taught a diverse crowd, including those who battle multiple sclerosis to those recovering from a stroke. Participants are usually above the age of 50, but all ages are welcome. Currently, two 92-year-old members are frequenters of the class.

“Her entire class is very dedicated,” Aquatics Director Danielle Krohn said. “They come every day and every week just for her. It’s a very social class.”

The group, Angie says, shares a family dynamic. They’re doing more than just exercising—they’re forming friendships and bonding. Years back, one of her peers wrote a poem about the class and gave it to Angie for her birthday.

“I still have it in the frame and I have it on my dresser,” Angie said. “It’s a real cute poem that she wrote. It’s quite long. She named a lot of the people in the class, and what we did.”

Angie’s commitment to the program and the resilience she has displayed is truly remarkable. For 37 years, she has been the epitome of healthy living at the YMCA. As for the future, Angie has shown no signs of letting up.

Rusty Hinges meets every Monday, Wednesday and Friday from 11 a.m. to noon. It is free for Full Members.