You are here: Home / Avery / All Together Better: Masters Swim Team Thriving 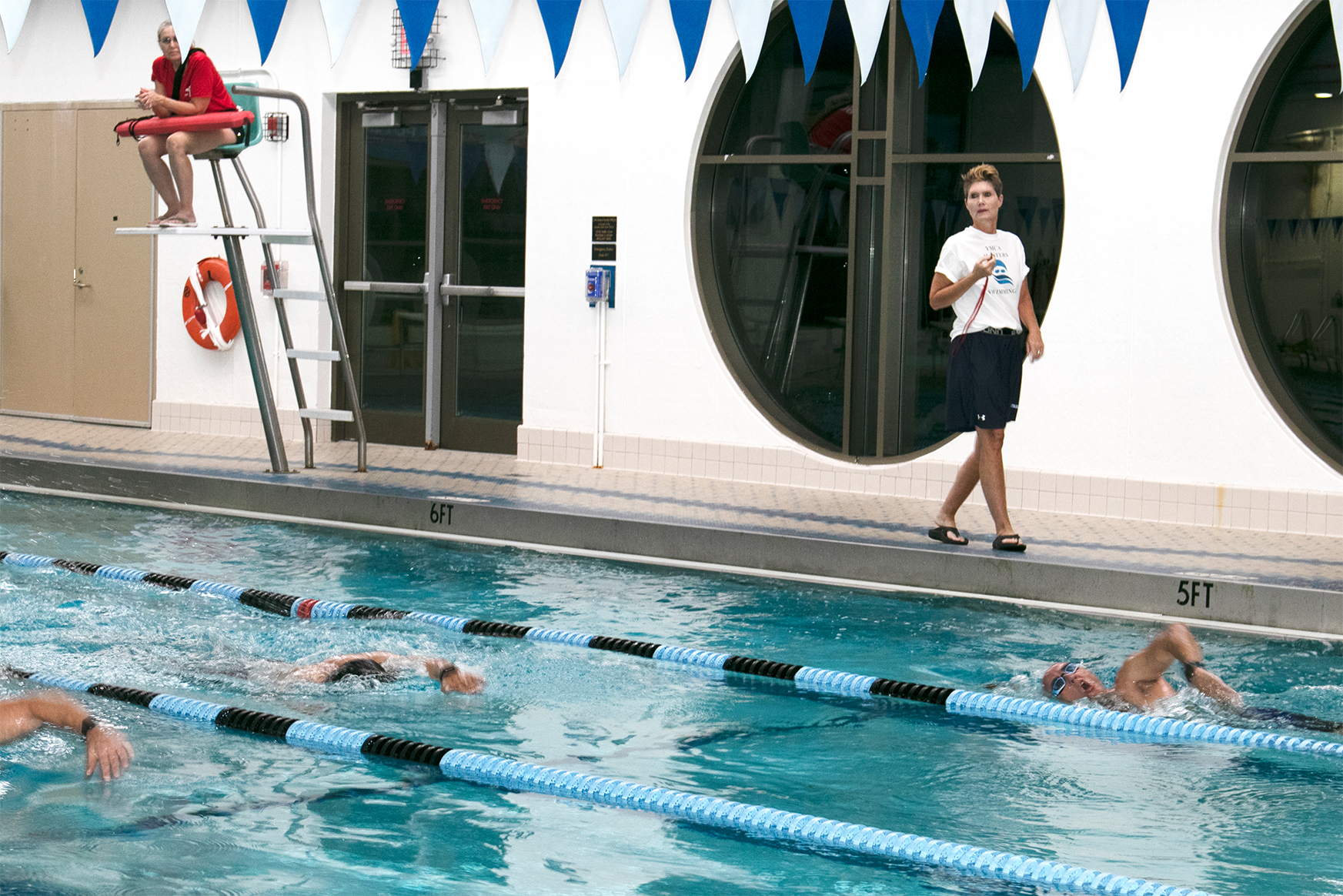 Bringing people together, building relationships through teamwork, and promoting an active lifestyle are key tenets of all Y programs. These same three principles are helping to guide one of the C.W. Avery Family YMCA’s newest adult programs- its Masters Swim Club.

Every Tuesday and Thursday morning, head coach Ann Emmrich can be found patrolling the pool deck at 5 a.m. encouraging members to work hard and get better, regardless of their background or skill level.

“We’ll start with people who think swimming is their weakest thing, but we also have former college swimmers who are elite. They’re all very dedicated,” Emmrich said.

Emmrich, a former lifeguard and recreation supervisor, said swimming has been a passion of hers since she was a young girl at the Allegheny Y in her native Pittsburgh. But her relationship with the current team didn’t come together until last fall when member Cathy Crawford saw Emmrich playing of all things, basketball.

“I came out of the locker room one morning and Ann was sitting there,” Crawford said. “She had been competing with her basketball team and she said ‘Do you swim?’ I said ‘Of course, do you want to be our coach?’ We got it together and the rest is history.”

Emmrich said her competitive nature kicked in and she began recruiting new team members. What had been a small handful of swimmers quickly became over two dozen, reigniting a passion for swimming in people like Tasha Marsaglia.

“I swam competitively in high school. To be able to get back to very similar times to where I was has been awesome. The little goals I try to set are fun,” Marsaglia said.

Doug Moss, a former college swimmer and freestyle state champion for the team, said he was asked to join after Emmrich saw him swimming laps while his kids took swim lessons.

“I do like winning, but for me, it’s about exercise and the camaraderie. I’ve gotten a lot of new friendships. We hang out after swim practices and meets on the weekends, and we do other workouts,” Moss said.

Individuals like Mike Powers, one of the program’s 11 gold medal winners at the senior Olympics last month, have been able to gain competitive experience for the first time.

“I took lessons at the Y as a kid and learned the proper strokes, but I’ve never been on a swim team in my life. That did not deter Ann. She kept after me and I finally joined. I’m really glad I did,” Powers said.

Husband and wife duo Jeff and Maxine Palmer joined the team to help train for ironman triathlons. Now they have a stable of teammates that push them to get better.

“For a while we were sort of the token couple of the group, but there are now a few other couples that have come in and we’ve made friendships. Camaraderie is a great thing to keep you going in exercise. Without that, it can get old sometimes. When you can do it together with other people it makes it more enjoyable,” Jeff said.

There are also team members proving why swimming can provide a boost for a lifetime of athletic activity. Diane Aros, 67, and Larry Hill, 74, have become team regulars and said that their experience has kept them sharp both mentally and physically.

“I’ve been swimming all my life, but usually just for my own pleasure,” Aros said. “I saw this group all the time and Ann invited me in. At first I was intimidated but she has made me feel very comfortable. I’m swimming double the amount that I used to and when I’m done I feel like a million bucks. It’s just amazing.”

“Ann has done such a terrific job putting all these people together. The benefit is of course the exercise, but also getting to meet people,” Hill said.  “When we went to the senior olympics a couple weeks ago there was a 94 year old guy there. I guess I have something to look forward to. And at my age, to look forward to the next birthday is a real benefit.”

And, as the team uses the winter to prepare for next April’s state meet, Emmrich is still on the recruiting trail.

“The most swimmers we’ve ever taken to a state meet is 29. I want to double that at the next state meet,” she said. “If anybody walks through the door and I see they swim, I’m on them to join.”