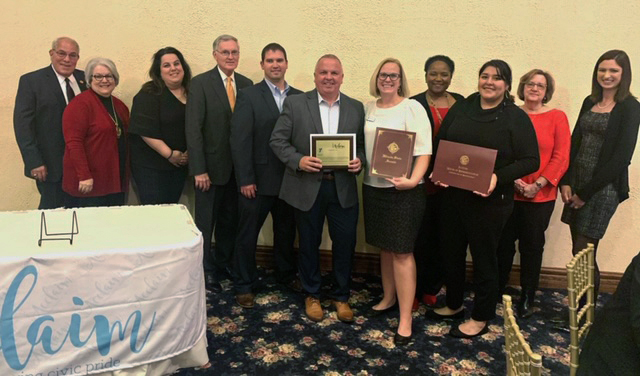 The Greater Joliet Area YMCA was inducted in Project Acclaim’s Hall of Pride at their annual banquet on Thursday, November 7. The theme of this year’s banquet was Joliet Renaissance: Celebrating Our Rich History, Embracing Our Bright Future, which reflected the work of the honorees and their impact on the community.

Project Acclaim, formerly Project Pride, was founded by Reverend James E. Allen in 1985 during a troubled period in the Joliet area.  Allen formed the organization alongside a group of downtown clergymen to highlight the positive aspects of Joliet, which included the establishment of Joliet’s Hall of Pride.  Since its establishment, approximately 140 individuals and organizations have been inducted into the Hall of Pride.

The Greater Joliet Area YMCA has been serving families—regardless of age, income or background—from throughout Will County and its surrounding areas since 1928. A mainstay in the Joliet community for more than 90 years, the Y brings families closer together, encourages good health, and fosters connections through fitness, sports, fun and shared interests. At the Y, no one is ever turned away due to the inability to pay. Last year, the Y provided nearly $1.5 million in scholarship assistance to children, families, and seniors who otherwise would not have been able to experience Y programming. Partnerships with the United Way of Will and Grundy Counties, as well as donations and grants from area individuals, businesses, and organizations allowed the Y to provide assistance to over 9,100 individuals in the greater Joliet area last year.