You are here: Home / Blog / Perseverance Pays Off 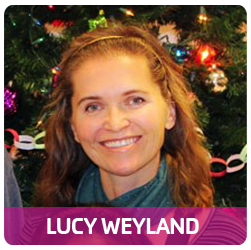 Lucy Weyland, a breast cancer survivor and former Y member, details her battle with cancer and how the Y helped her feel like her old self again.

Not long after adopting our two children, I was diagnosed with ductal carcinoma in situ (DCIS), a common type of non-invasive breast cancer. As a result, I underwent six different surgeries, including a double mastectomy, and endured 16 weeks of chemotherapy treatment. I gained weight, lost my hair. I was told I’d never play the game of volleyball again.

In the fall of 2010, while still seeing an oncologist regularly and having painful and debilitating side effects from the surgeries and drugs, I decided to join the Y. I couldn’t play the only sport I loved, but I thought I could figure something out.

I started by working out independently and slowly regaining my strength and endurance. After a year, a former neighbor suggested that I take a class, that it could be more effective. First I resisted, telling her that I had stuck my head into several classes and that they seemed too loud, with music blaring and the instructor yelling into the microphone. My neighbor, without skipping a beat, said, “Oh, Lucy, just suck it up and try it!”

I took my neighbor’s word and tried my first class the next day. Admittedly, I was instantly hooked. The music was great and I felt motivated—not only by the instructors but by fellow participants.

Eventually, my range of mobility began to increase considerably, and my strength, endurance, and flexibility did too. Doctors took notice as well. At every subsequent appointment, they were astounded by my improved looks and corresponding lab results…and I had many appointments with many doctors at that time.

My rollercoaster ride with cancer has slowed, but it will never really end. I have to see an oncologist for the rest of my life. But as I reflect on my journey, I’m thankful I found the C.W. Avery Family YMCA when I did. During my time there, I met and became friends with an incredible group of people. I know it sounds corny, but the Y became my second home. Bittersweetly, my family and I recently relocated to Sarasota, Florida. We did, however, purchase a home five minutes from the Evalyn Sadlier Jones YMCA. And that was no accident.